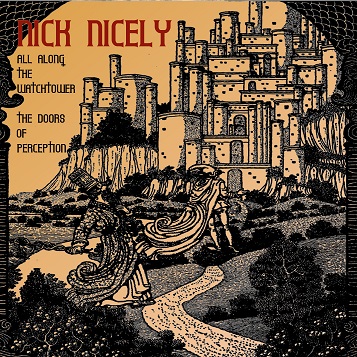 If you're in the UK, you can order here (if you're not, please go to our SHOP page for options)

"Nick’s reinvention of ‘Watchtower’ brings his innovative electronica to shine a light to new facets of the song not heard before" (The Strange Brew)
"Covering a song is all about taking it places that it hasn’t been before, of offering something new and being willing to dance on sacred ground and if I can be permitted a pun, all I can say is Nicely does it. Brilliantly" (Dancing About Architecture)
"momentary slices of tripping eastern mosaics, head expanding fried psychedelics and bliss bathed astral glides" (Mark Barton - Losing Today)
"a foggy bed of Mellotron, stinging waspish lead guitar, found sounds, seagulls, drum and bass, spoken treated vocals, and backwards guitars" (Terrascope)
"such a teetering mass of sound that you’re halfway through and you’ve already forgotten that Bob Dylan once wrote this song" (Goldmine)

nick nicely is back on vinyl, and back on FdM, with a double A-side - two epic tracks recorded especially for us, one a reworking of Dylan/Hendrix's 'All Along The Watchtower', the other a new song called 'The Doors Of Perception'.
Nick's electronic wall-of-sound is in full force on both tracks - together, they probably define what modern psychedelia is meant to be - except nobody else can do it quite like Nick, so I'll leave to the man himself to do a bit of explaining....

I don't do covers generally, but for one of Pete Bingham/Keith's festivals I thought something familiar might prevent people drifting off and be an opportunity to swap guitar licks with ol' mucka Paul Simmons, on a twin lead section. Never made the festival and anyway the Frond were there on a different day, so all dreams turned to ashes...til Keith suggested releasing the 'irreverent' Watchtower backing tapes plus studio vocals/guitar/Fx.

Doors Of Perception is similarly constructed with tapes from my current live show plus studio vocals/guitar, so the pair connect well.

We all have boundaries but when it comes to making Fruits de Mer Records I feel duty bound to go to the edges of mine...two trax born out of live, flying their freak flags along my sonic borders.'

all the best, Nick

here's just an excerpt from 'Watchtower'...
please email fruitsdemer7@hotmail.com if you're not already on an FdM mailing-list, so I can make sure you don't miss out on anything