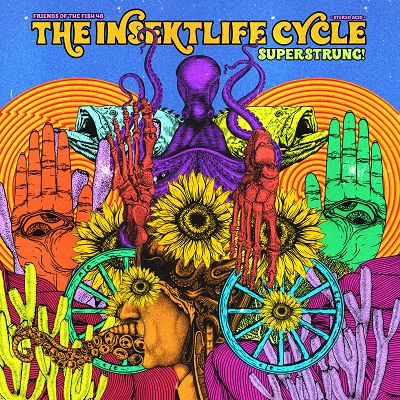 The Insektlife Cycle are an instrumental rock group based in Pateros Metro Manila, Philippines, formed in 2013 by members of the bands Hateure & Barabbas. They have already released singles with Fruits de Mer Records and an album with Sugarbush Records.

Their new four-track EP is being released by Fruits de Mer Records as a super-limited 8” lathe-cut (just 100 copies worldwide). The band describe it as, “a sonic work of instrumental heavy psych and modern blues in sunshine acid”

The record has been engineered by guitarist Ronnel Vivo and produced by the band.

It will also be released in the Philippines by local label PAWN Records on cassette.
The lathe-cuts are being made by Phil at www.345rpm.com

Here's a taster for the EP:

...and as a bonus, the band are including a two-track CD featuring their covers of songs originally recorded by Filipino guitar legend Wally Gonzalez, who sadly died very recently.

as with all our lathe-cut projects, this release will be seriously oversubscribed, so we will be doing a lucky draw from all the emails we receive - more information on how to register an interest has been sent to everyone on our mailing-list soon - if you're not already on our mailing-list, just click HERE and you'll hear about everything almost as soon as we know ourselves OR email me - fruitsdemer7@hotmail.com - before the end of September and I'll put your name in the draw

All copyrights reserved 2021
www.fruitsdemerrecords.com
...hear the tracks.. ..buy the vinyl.. ..smell the fish...