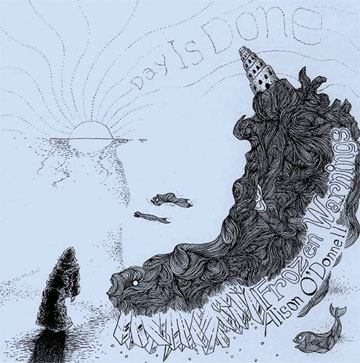 Rather than tell you how great the Alison O'Donnell Nick Drake/ Nico vinyl is we thought we would just share with you some reviews from people who have a had a listen and thought they'd write about it. Just remember this vinyl is limited to 300 pressings in a cooly icy-blue vinyl delivered to you anywhere in the world for just $7.50.

Norman Records
"The a side is a cover of Nick Drake's 'Day Is Done' which is a dicey one to cover just cos it's so dear to a lot of folks hearts. I think she gets away with it though as she's got a lovely voice and the music has been played sympathetically. The flipside is a is wierd fuzzy psych folk thing which I oddly prefer. It's kind of dark sounding with a Venus In Furs thing going on in it. Well good!!"

Organ Magazine - Single of the Week
"You really can't go wrong with a Nick Drake song can you? Well yes actually, these things are very precious, the bird has flown and you have to have something very very special to really live up to the magic of the original. Same with Nico, two beautifully tragic people, two exquisite music makers, two precious songs that require careful handling, loving care and attention to detail... Second part of this Fruits De Mer series of limited edition coloured vinyl seven inch singles where the label invites a singer, band or such to record two classic covers. Alison O'donnell has a such a rich dark full voice, she sings her choices of Nick Drake's Day Is Done and Nico's dark moody Frozen Warnings in such a beautifully transient way. So full of space and warmth, I must confess I was a little worried about listening to the Nick Drake cover - nothing to worry about here, these versions are wonderful. Really must go and explore what else she has, these versions are magical." 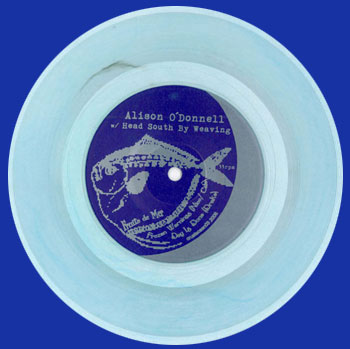 Peter J Brown aka Toxic Pete
"Not just anyone could re-model a Nick Drake song and certainly anything by Nico could prove to be almost impossible. But, Alison O'Donnell's managed to do justice to both Nick Drake's 'Day Is Done' and Nico's 'Frozen Warnings'; a massive feat methinks. O'Donnell's naturally otherworldly delivery allows her to pick up Drakes haunting and sentimental 'Day Is Done' and make it her own; subtle guitar picking and sparsely punctuative bass and drums add a certain Drake-esque tension to the beautiful song as O'Donnell puts her soul deliciously on the line with a fantastic vocal rendering. If Drakes song wasn't haunting enough, the almost inimitable Nico's 'Frozen Warning' is positively dripping with icy darkness as O'Donnell fills the grim but somehow mellow depths of the piece with more superb vocalisation set against the drone of Cale-esque tones and timings. Amazingly, O'Donnell's re-visited creations become personal and heart-felt, her delivery precise yet empathetically steely and cold to drag every last crumb of remorse and grief from deep inside as she becomes at one with the songs. The girl chose well; two classic downbeat songs, neither easy to cover, both concealing possible numerous pitfalls for any would-be plagiarist but both beautifully handled here by Alison O'Donnell with her insightful and compelling look into the murky depths of both Drake's and Nico's chemically adjusted minds. To choose two such difficult songs was perhaps a gamble by Alison O'Donnell - well, the gamble paid off and O'Donnell can hold her head high in the knowledge that she did herself and Drake and Nico proud with her scintillating versions of their songs."