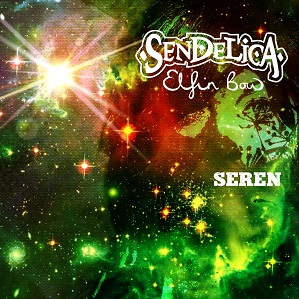 copies will be offered to club members first

A collaborative single that would have been a 2020 Dr. Sardonicus festival exclusive, but now won't be for obvious reasons.

"Turning and evolving and revolving and twisting A nice expression of how this came to be.
Originally Elfin Bow recorded the vocal for a remix of Sendelica's Light Star from Cromlech IV. Elfin's vocals are about exploring information about the Universe and Stars and Wonder. Pete and Colin wanted to respect that and draw in all of the strange and delightful threads that she had spun and create a fitting musical garment for them. It’s all so evidently cosmic that big space and grand sonics were inevitable, from Pete’s wobbly guitar from the centre of the Universe to light breathing space that Elfin Bow exists in and the grand swathes of sound that wash around the mix. Yet, in the final examination, it’s about the universal connection that unites us all. For all the grand expansive thoughts and sounds, the players unite, locked together to create a solid, earthbound vehicle. A vessel to transport us all away from the ordinary into an extra-ordinary awareness of that straight line through time that is not one line but many, not one path but many.
That light that makes us all stars, we are all one

The other side of the single is Elfin Bow and Gary Lloyd's version of the Small Faces' 'Autumn Stone', which appeared on the 'Band For All Seasons' CD set but has its first outing on vinyl.

After hearing Elizabeth's beautiful version of 'Who Know Where The Time Goes', I was very keen to have her contribute to the 'All Seasons' set and felt that Stevie Marriott's song would lend itself well to her voice ('Autumn Stone' is a simply beautiful, reflective song, showing a side to Stevie Marriott that rarely surfaced).

Turns out I was right - and you should also check out the stripped-down version Elizabeth contributed to the '17th Dream Live' double LP.

More news on this release soon