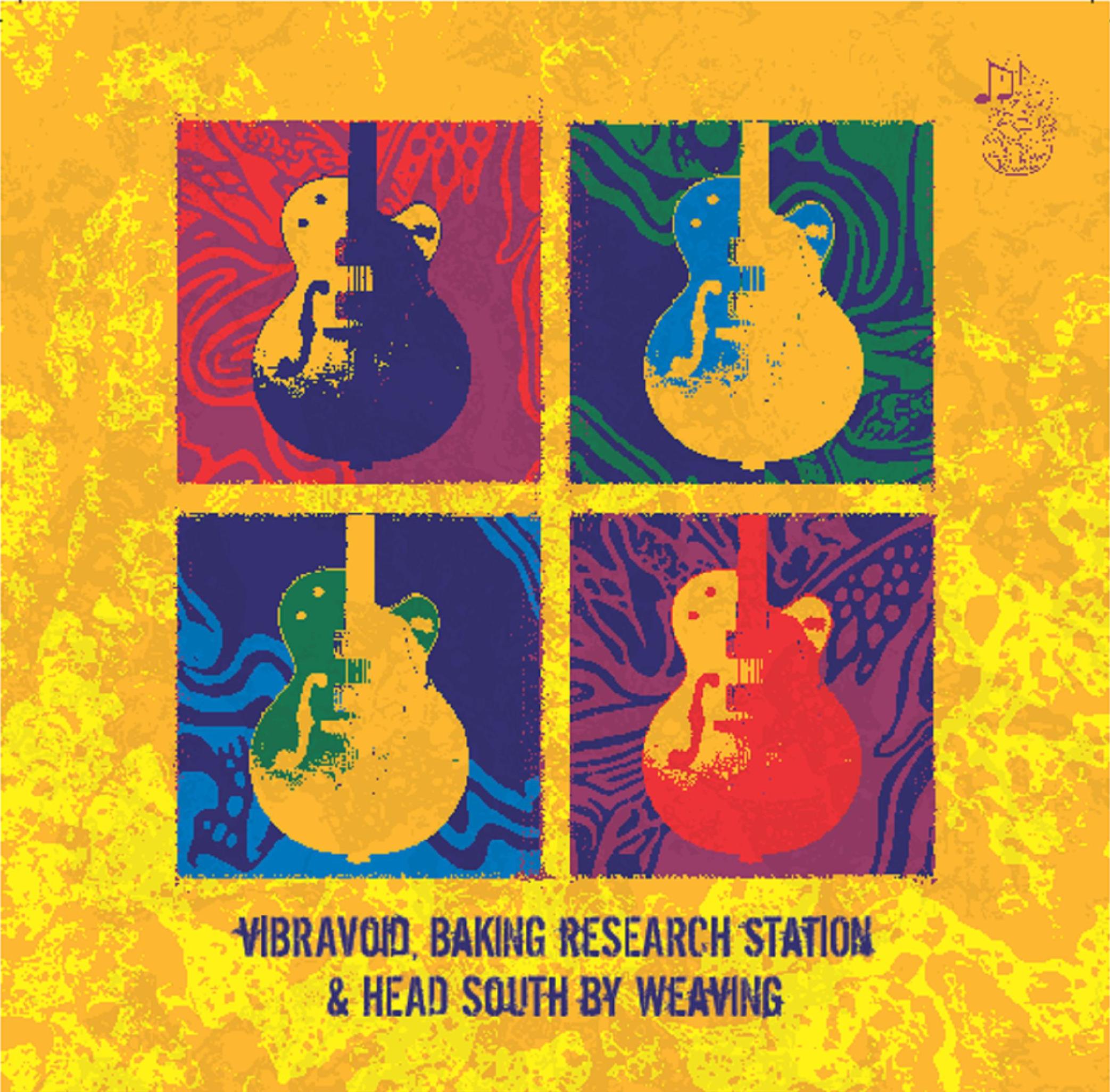 FdM's 7" homage to one of the greats of Rock'n'Roll, with three instrumentals that take Eddie Cochran's originals as inspiration to create something new, different and very cool.


Now, I have to admit I only knew of Eddie as one of the pioneers of rock'n'roll/rockabilly, but Andy is a massive, massive fan and assured me there was much more to the man than the songs that appear on every 50's compilation, and he's right! I've heard the original tracks and all three of the covers and they take you to places you've never been before.

One of the original tracks only ever saw the light of day as an acetate and could be from anywhere from 1965-1969 (actually, it's from 1959, Andy thinks); it sounds to me like a soundtrack to a Peter Sellers film from 1968 when he didn't get the girl. Our cover could be from 1966 or 2010, and it could be a mash-up of lots of stuff from inbetween (think Type label, think kosmische, think kitch, think Cream's 'I Feel Free', then take a headache pill and have a lie down).

The second cover features what sounds like sitars and theremins to me - but what do i know, I DO know it's by VIBRAVOID - a sure sign of something pretty special. And the final track is by a band that will sound new to you - the Baking Research Station - but we already know them as...sorry, we can't tell. But think heist movies, think film noir, think a beautifully understated instrumental.

Tracks are :
'Rain' by Head South by Weaving (who backed Alison O'Donnell on her FdM single)
'Shotgun Wedding Theme' by Vibravoid (no introduction necessary)
'Jam Sand-Witch' by Baking Research Station (who will remain a mystery)

Andy has written a rather classy four-page insert to go with the release, telling the story of the tracks and a fair bit about Eddie too - Stuart Maconie quoted liberally from it on the 'Freakzone' recently - fascinating stuff.

Nick Leese from Heyday Mail Order thinks it's our best release yet, so we have a feeling this going to be a difficult release to track down - drop Andy a line now - andy@fruitsdemerrecords.com - just in case he has one last copy to spare.

7" orange vinyl; on sale late-November 2010 (Fruits de Mer 15)
Why would a label that purports to specialise in psych-kraut-folk-prog release an Eddie Cochran covers EP?

Put simply, Eddie Cochran is my music hero (says Andy Bracken from Fruits de Mer). Not many people know that. It all started when I was three, dad's old records and 'Cut Across Shorty'. 'Three Steps To Heaven' never did much for me.
In the thirty-odd years since then, it's grown into a bit of an obsession, albeit one somewhat restricted by budget. So I suppose it was an inevitability that, at some stage, FdM would be used as an outlet for that.
See, what struck me was the fact Eddie was only a couple of years older than Lennon and co. Had they gone to the same school, he may well have known Hendrix etc. Remember, Eddie was dead by 21. Even so, he managed to lay down 900+ confirmed tracks, and an additional 500+ speculative ones as a session man. Take a look farther down this document at the reference points mentioned by the featured bands. Eddie was younger than Delia Derbyshire and David Axelrod. Now, you need to forget 'C'mon Everybody' and 'Twenty Flight Rock' for this release. A high percentage of Eddie's recorded output in 1959 was instrumental, and didn't see light of day till much later. He claimed that year that he believed instrumentals to be 'the future', and he was right to a degree, as evidenced by The Shadows, Ventures, Joe Meek and so on - a nice alternative to the crooners that dominated in those pre-Beatles early sixties, and a kick against Liberty Records, who had managed his career in a crooning direction for the previous 3 years. 'Summertime Blues' was initially a b-side to the fairly awful 'Love Again', for example!

Eddie Cochran also embraced technology and new trends, yet always sought somethin' else, something different. As a fifteen year old, he was experimenting with multi-tracking tape and microphone placement (such as suspended inside a piano). He loved the echo in the lesser Gold Star Studio where a lot of his output was recorded. He dabbled in samples and vocal effects long before it became commonplace. George Martin would have loved the bloke.

The three bands featured on this record will be familiar to FdM consumers. I invited bands I knew and trusted (a testament to how important this release is to me), and bands I knew could skew the tracks and take them on in a way I thought Eddie might have approved of.

As Graeme (Head South By Weaving) put it:
"Mr Bracken sent me this strange recording of Eddie Cochran playing a classical guitar with the covering note, 'make it sound like it was recorded in 1969 instead of 1959'. So I got to work. The first section of the track is quite faithful to the original, but in an attempt to work out what was going on in the second section of the original I found myself playing a short segment of it around and around. It turned out to be quite hypnotic so I kept it. It needed a lift so I recalled Mr Bracken's suggestion that I could 'add some Robert Kirby strings'. Unfortunately I don't know any string quartets, so just cranked up the reverb pedal instead. At that point I basically got carried away, although underneath it all is the roots of Mr C's original recording. I wanted some singing on it right from the start of the process and immediately thought of Helen (Beeby). We had talked about doing some recording together a long time ago, but I think she thought it would never happen. Anyway, it did - and this is the result"
It goes from Tony Hart's Gallery to something quite Germanic, and remains simply beautiful for its six and half minutes. 'Rain' was written by Eddie in (estimated) late-1959. The only known version was discovered by Tony Barrett of Rockstar Records decades later on scratched acetate, and first saw light of day in 1988. Rumoured to have been penned by Eddie for Duane Eddy, and played to him in a London hotel room in 1960, Eddy has since said that it doesn't sound like the track Eddie played him. To these ears, it doesn't sound like a Duane Eddy track, but it could have mutated in the interim period. Sadly, Eddie died before anything with Duane could be worked on.

Vibravoid were given three Cochran tracks and told to pick one. I only did that to see how like-minded Christian and I are! It was clear to me that Vibravoid should cover 'Shotgun Wedding Theme', and sure enough, that's the one they opted for.

Christian Vibravoid "I felt the basic track was a blueprint of 60s garage music to come. The guitar riff is 100% Pebbles, so I thought it natural to work this out. I guess the oriental feel came from the idea to substitute the guitar with the sitar for a typical flair of that time. The original version is a driving cut so I felt it necessary to get a strong groove into the new version"

Yes, I think they achieved that, with nods to Barrett and Hendrix along the way!
First released on the Rockstar 7" EP 'Walkin' Stick Boogie' in 1979, it was discovered (once again) by Rockstar Records in the 70s. Rumoured to have been written for a film, the track was recorded by Eddie in 1959 at the same session in Hollywood (studio unknown) as 'Country Jam';, another instrumental. A film named 'Shotgun Wedding' did see limited release in 1963 in the USA, but these tracks aren't in it.

Baking Research Station is Rob and Julian from Cranium Pie. I asked Rob why he took the track in the direction he did: "Having indulged in many mind altering narcotics in the late 60's, Eddie returned to his Jam Sand-Witch from an unusual angle, deciding to rename it 'Jamsarni', a Mexican word to describe the mescaline rush, which he interprets in the choruses. With drums and bass influenced by his good friends 'The Electric Prunes' and David Axelrod, he travelled to Abbey Road to record this song, with Delia Derbyshire (BBC Radiophonic Workshop) guesting with her laboratory of electrickery"

Its very different to the original, for sure, but what else would you expect from a Cranium Pie related release? As I said, I wanted the tracks to be skewed, and the Delia Derbyshire reference is spot on! This goes from The Clangers, via Doctor Who to prog-jazz-psych-foot-tapping-something-or-other. Not easy to define. Jam Sand-Witch, as the title suggests, was recorded as a Halloween novelty (along with Have An Apple, Dearie (aka Big Red Apple)'; in October 1959 at Gold Star studio in Hollywood, and was first released on the UK Liberty LP “My Way” in autumn 1964. So, why would a label that purports to specialise in psych-kraut-folk-prog release an Eddie Cochran covers EP? Because I am convinced, had he lived, that Eddie would have embraced all of those genres, and perhaps – just perhaps – he'd have been doing something akin to the tracks on this record.
Because I like symmetry, Earl Palmer worked a lot with Axelrod, and played drums on two Electric Prunes LPs (Mass In F Minor and Release Of An Oath), actually completing the latter when the Prunes disbanded. Earl Palmer also plays drums on Eddie's original version of 'Jam Sand-Witch'.

Incidentally, Graeme's (HSBW) dad was a big fan of late-50s instrumentals, and via that, Graeme has inherited a fair few Duane Eddy 7" singles, a fact that only became apparent after the track was completed. I guess this record was just meant to be! Original Cochran versions of all 3 tracks can be found on the highly recommended 'String Fever' CD (RSRCD031) released by Rockstar Records in 2009.